If you would like to donate to our project please visit
https://cmwdp.co.uk/aldonations/
Any support is highly appreciated!

With approximately 100 remaining in the wild, the rarest big cat on Earth has the chance to be brought back from the brink of extinction!

The remaining population of Amur Leopards is dwindling and occurs in such a small geographical area, that they are at a significant risk of extinction!
With the continuing threats, one outbreak or natural disaster could spell the end for Amur Leopards.

Amur leopards are found in Far Eastern Russia and North Eastern China. They are an apex predator and love to eat deer and badgers. Of all the leopard subspecies, the Amur leopards has the most beautiful coat with wildly spaced large black rosettes with thick unbroken borders. They have no known predator other than Man, which made their population dwindled in the 1980’s to just 30 individuals and it stayed this way for decades! Thankfully through recent positive human intervention their numbers are growing. But they still desperately need our help due to genetic degeneration associated with inbreeding over several generations.

As part of a major push to reverse the damage done to the dwindling population, specially selected European zoos are working together through coordinated breeding efforts to maintain and increase a healthy population of the Amur Leopard. Captive-bred Amur Leopards will be the founders of future generations who are eligible for reintroduction to the wild. 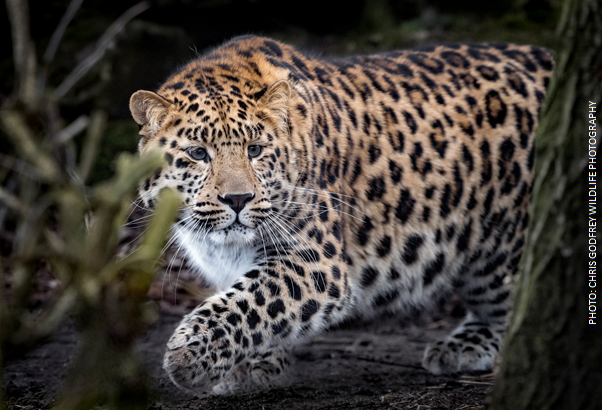 By introducing a genetically viable population at different locations, this would make the Amur Leopard more resilient to extinction. This is why, along with other conservation initiatives, the reintroduction of captive-bred animals is so important for the survival of the Amur Leopard and could be the key to bringing this species back from the edge.

With your help Combe Martin Wildlife & Dinosaur Park
will be directly contributing to the future survival
of critically endangered Amur Leopards! 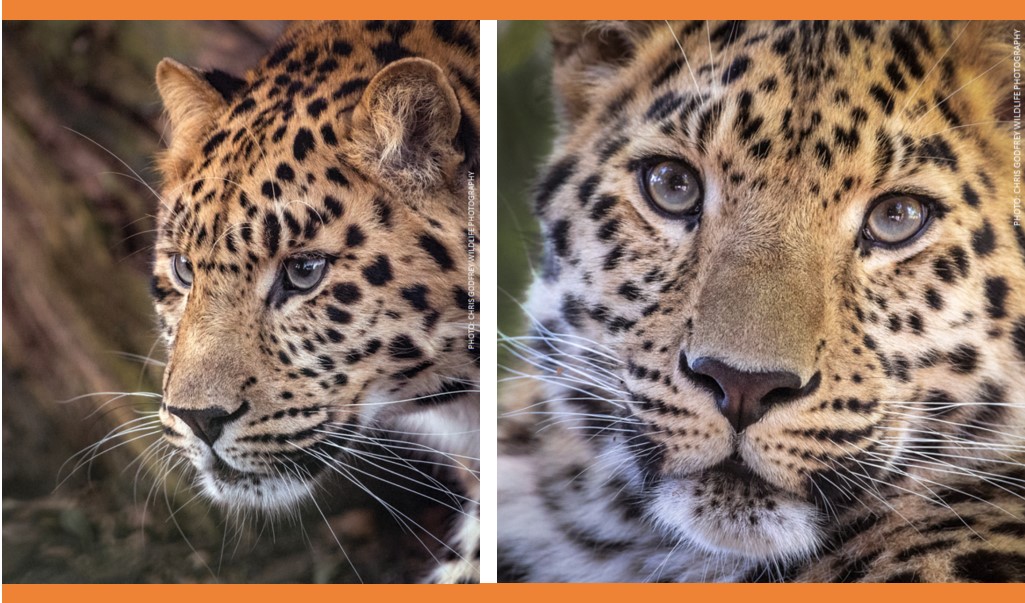 Utilising our terrain that is naturally representative of their Russian habitat, Combe Martin Wildlife and Dinosaur Park has been given the opportunity to be an integral part of the reintroduction of this critically endangered species.

This enclosure will be built with one thing in mind – to create the best possible natural environment for which the Amur Leopard can call its home. It will become an integral part of the breeding and ultimately,  release program.

All of the money donated will be used for this project.
We will be able to pay for:

With your help we can build one of the most amazing and biggest Amur Leopard enclosures in Europe, ensuring that these elusive cats have plenty of space full of the natural enrichment they need and deserve!

Combe Martin Wildlife and Dinosaur Park’s commitment to conservation, combined with our site’s wild, rugged and natural landscapes, will make us the perfect home for the critically endangered Amur Leopards.

The Amur Leopards will have an entire wooded valley covering approximately 6000m² situated in a quiet and previously unused area of the park. This amazing valley is dense with 50 foot high trees, some of which are over 70 years old, as well as rocks covered in ivy and ferns throughout. It also has a natural stream that runs through the center of the woods which pools at the bottom of the valley.

This is a hugely challenging build project due to the valley we have chosen and it is way beyond anything we (or any other Wildlife Park or Zoo) have done before. The entire enclosure is being built and designed with 100% thought of the leopard’s requirement. It would be easy to build this size enclosure in a flat field with platforms replicating trees  BUT we want the enclosure to be as close to their wild habitat as possible and that’s why we are trying the near impossible build!

Anik and Kazimir are the two brothers that with your help will be coming to our wildlife park. They were born at the Marwell Zoo in Winchester on the 25th June 2016.  From a very young age, they have been very playful and responsive to each other, as well as the environment around them. They are very inquisitive and confident animals, with Anik being the more dominant of the pair. They both love to interact with enrichment that their keepers give them, they are often active in the morning and then after being fed will find a comfy position up on a high platform and either survey the area or sleep. Anik and Kazimir are steady and adaptable animals that will benefit greatly from the naturally enriching enclosure we plan to build for them. 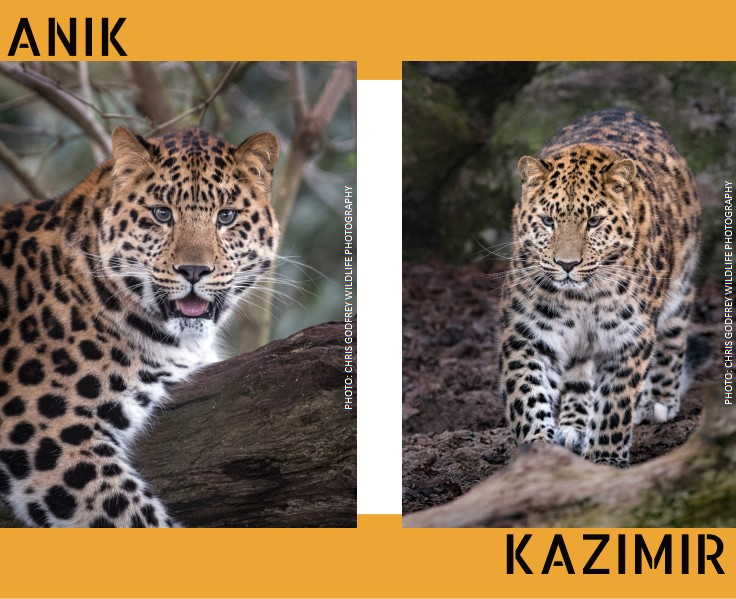 We plan to use their arrival as a platform for raising awareness and funds for conservation work currently being carried out in East Russia.

Anik & Kazimir will stay with us until they are both paired with a suitable breeding female. One pair will remain with us while the other pair will be rehomed in another collection that is participating in this unique breeding program.
These two breeding pairs will then hopefully produce cubs and their story can continue……..

We already have a strong commitment to conservation, we house several endangered species and contribute to international breeding programs. As well as our exotic residents, Combe Martin Wildlife and Dinosaur Park are committed to native species conservation. We have provided homes to our wonderful resident wildlife, including foxes, badgers, hedgehogs, bats, songbirds, buzzards, woodpeckers and a whole host of creepy crawlies, including the threatened Violet Oil Beetle.

Over the past 5 years we have worked with the RSPCA to house and rehabilitate rescued Grey Seal Pups. These Seal Pups are then released by our staff back into the wild on the Combe Martin beach just 2 miles from us here in Devon. By carrying out this collaborative rescue work we are directly contributing to the conservation of our native marine wildlife!

Here are just a few more examples of our conservation and charity projects:

This project alone won’t save this species. However with the combined effort along side other carefully selected European Zoos participating in this breeding program, Combe Martin Wildlife and Dinosaur Park is fully committed to playing a part in the preservation of this critically endangered cat.

Join us on our journey to get the rarest big cat on Earth back to the wild.
The Amur Leopard.
Be part of the story from the beginning. 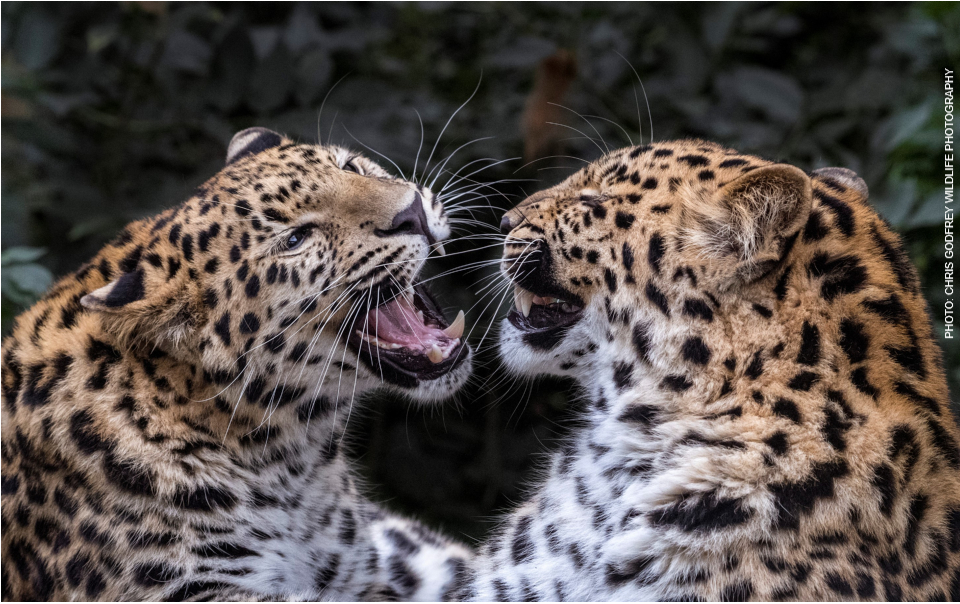 Big thank you to everyone who is supporting our
‘AMUR LEOPARD: Back To The Wild’ project!